In one of my first articles, I created a diagram of the title structure in that time (May 2013), compared to that of a decade ago. Forward on a year or so, and this hierarchical diagram is still very much relevant and appropriate. Nowadays, WWE’s product is severely diminished due to the way championships are distributed and champions are portrayed. Back in the day, a championship belt made the man – which was a perfect ingredient to add to a concocted formula of creating a top-flight star. Today however, due to the degradation of title belts (being overshadowed and thrown on anyone), the trend of a man making a title belt relevant is starting to occur.

Let’s revisit CM Punk’s 434-day title reign last year. This was brilliant, as having the belt change so rarely revived its prestigious aura. It generated more anticipation as to who would hold it next, and it also boosted Punk and his career in more ways than one. 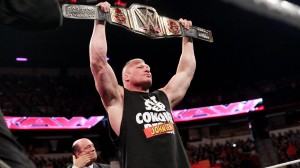 This was a prime example of having the championship belt make the man – or making the man greater than he initially was. Aside from that instance, it’s difficult to think of an example of where this has happened in more recent times. In this current feud with John Cena and Brock Lesnar, it’s almost as if their rivalry is overshadowing the grand prize. This match would do just fine without the title at stake, but with it involved, it’s becoming an afterthought – especially after Cena got his a** so drastically handed to him at SummerSlam. A title belt should always be the primary factor that makes a match exciting, and should not be overshadowed by the combatants or story itself. It’s hard to think that this could ever be the case these days, and that’s because WWE’s portrayal of championship belts have made them irrelevant, which shouldn’t have happened in the first place!

It’s not just the WWE World Heavyweight Championship that’s been affected either – it’s safe to say that all of WWE’s belts have diminished in prestige and value. WWE could do several things to make their championship belts become more relevant to solve problems like the one above:

These are just a handful of thoughts and ideas of how WWE could regain their titles’ prestigious value back. With these values restored, WWE can achieve the perfect combination of story-line and championship-driven content, ensuring that every match in a weekly show or PPV has some relevant meaning. This would lead to more interesting matches, keeping everyone watching more engaged.

What are your thoughts? Are you happy with the way things are going right now, or do you agree that WWE title belts have lost their aura due to their de-prioritisation? Let us know in the comment section, and please share!